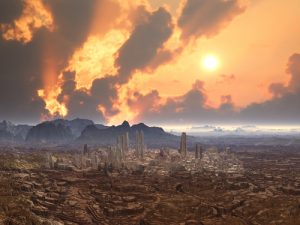 In the 88.3 series it was a challenge to show the sudden climate change from a hot-dry world to catastrophic storms and flooding. This picture is interesting; what appears to be natural formations in the foreground are actually habitations. Kansas City is at the meeting-point of three major rivers; the Kaw, the Blue and the Missouri. The big Platte, draining an enormous expanse of prairie country in Nebraska, Kansas and even Wyoming, empties into the Missouri just north of Kansas City. In this over-urbanized world of the future, human beings in general and the controlling class in particular would have forgotten entirely about things like drainages and riverbeds.  They are all covered over in slum apartments, shebangs,  unauthorized shacks, shanty-towns and streets.

Even the maps of the rivers and their drainage patterns have been lost. Except to a few. Thus the devastation is unmeasureable.